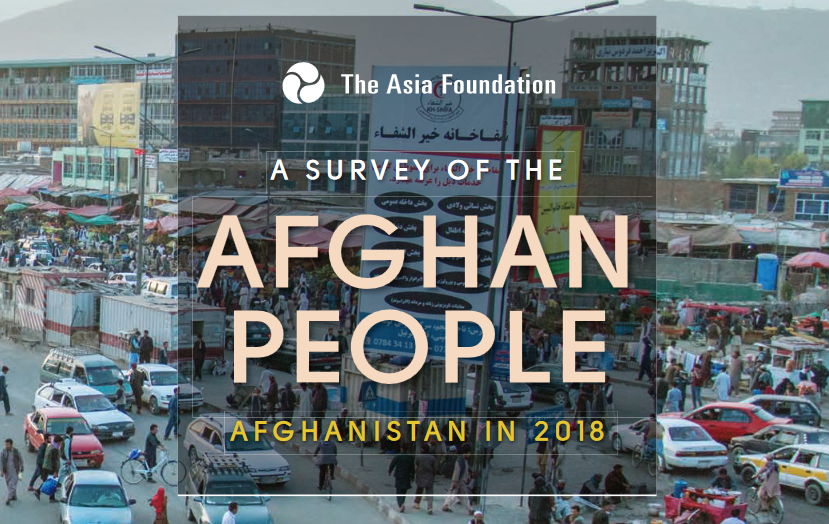 KABUL, Afghanistan, December 17, 2018 – The Asia Foundation has released findings from the thirteenth annual Survey of the Afghan People, conducted by ACSOR-Surveys, Afghanistan’s largest survey research company, founded with the assistance of D3 Systems, Inc. Events to mark the release and present key findings were held both in Kabul and in Washington, DC at the U.S. Institute of Peace on December 4, 2018. A follow-up presentation on key findings from the survey related to women and gender equality was held at the Carnegie Endowment for International Peace on December 6, 2018. Video of that presentation can be viewed online.

As in previous years, the survey has received coverage in international news media, including Reuters, U.S. News & World Report, and Digital Journal, as well as from Afghan media such as Tolo News and Pahjwok. Conversation about the survey findings has been taking place across Twitter and other social media, marked with the hashtag #AfghanSurvey.

The survey covers a wide range of topics, including security, economics, development, women’s issues, migration, and governance. The survey found that most Afghans continue to feel that the country is moving in the wrong direction, and more than a third would leave if they could, with insecurity, unemployment, and poor governance cited as the main reasons. Fear while voting or participating in a peaceful demonstration has also increased. However, the survey did find some hopeful signs: support for women’s access to education continues to increase, with 84% now saying that women should have the same opportunities as men in education. The survey also found that despite recent gains by the Taliban, support for the movement remains low, with only about 5% of Afghans expressing sympathy for the movement. Sympathy for ISIS/Daesh is essentially non-existent.